Back when I worked in the film business as a location audio recordist, I always had difficulty finding a place to stand among the lighting stands. The lighting guys got to the shoot location earlier than the sound crew (me), so the prime real estate for microphone-boom-pole placement was usually gone. But I said “if you don’t want audio on this shoot, I’m OK with that”. The lighting-stand forest would then part somewhere, and in ceding me a place to stand with my mic boom, the almighty Lighting Director made it clear that this was a begrudged little plot of studio floor I was being given.

A few years later, after the same Lighting Director had accepted my right to be at the shoot and to occupy space, he said something that stayed with me (my own version follows). This was at a time in video production that digital effects had become affordable – if you call a half-million-dollar box affordable – and people were afraid their jobs would go away as these magic digital boxes appeared.

But the LD (Lighting Demi-god) – Dave P. – said gruffly “shoot hey, there’ll always be light”. This was after he had given me the Mole-Richardson history-of-lights tour (“this here Mini-Mole Inkie was designed in 1936” or some such). His point made a bunch of sense – some things will always depend on physics, like the continuing need for light. We don’t use film much anymore, and though a lot of movies are now mostly digital effects, light is still a requirement when recording images of humans. Real humans, anyway.

My version of “there’ll always be light”? There will always be a need for good-sounding acoustical spaces. “There’ll always be acoustics” – I like it, and it’s true. Our hearing system wants to make sense of the world and to make sure we’re safe, so our ears are always attuned to our environment. Humans prefer rooms in which it’s easy to hear what’s going on, whether music, speech, or potential danger.

There’ll always be acoustics, regardless of digital this or that, regardless of whether you believe (mistakenly) that a digital program will “fix your room”. The laws of physics have NOT changed, and the effect of a room on sound will always remain. So fix the room – then, if you still feel the need, use a digital box to alter the signal fed to the speakers. If it makes you happier, go on with yerself. Just know that the room is always there – fixed or not, and fixed always sounds better. 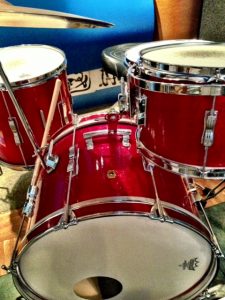 September 17, 2013 / 2076 / 0
My interest in acoustics started long before I was aware of it. I played drums and percussion starting in 5th grade band, and continued through... Continue reading